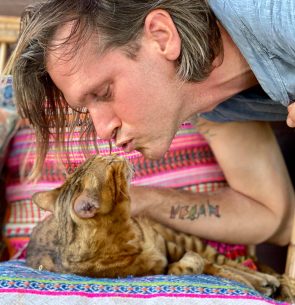 www.rainbowyogatraining.com/
About Gopala
Gopala has been working to make the world a better place since his teens, first through music, and then with yoga and meditation practice starting when he was 14. This continued with his inner work as a Hindu monk for 10 years with the Sivananda Ashrams.

Gopala has been teaching yoga for adults and kids since 1995, expanding the idea of inner peace for world peace when he opened the Yoga LeShalom (Yoga for Peace) centre in Tel Aviv.

Gopala, with his beautiful family are on a mission to spread concepts greater than yoga and inclusive of all beings. Love, community and connection are at the heart of Gopala’s intentions to create a social evolution that will bring more kindness to our interactions with all human and non-human animal friends.

About Rainbow Yoga
Rainbow Yoga is a fun and constantly evolving family mission. Rainbow was lovingly born in 2007, with the mission of nothing less than making the world a better place!
By giving people the tools to teach fun, engaging, and creative yoga classes for kids, teens, families, partners and communities, we bring people together and educate them about kindness.
By creating meaningful connections and encouraging a healthy lifestyle we touch the hearts of many and create the social change we all want to see on our beautiful planet that we are here to care for and to share with all living beings.

Founders of Rainbow Yoga, Gopala and Angel Yaffa run Kindred Spirit Sanctuary, an Animal Sanctuary in Byron Bay, Australia. You can let your heart open and melt with joy and kindness by following them on Instagram here @kindredspiritsanctuary