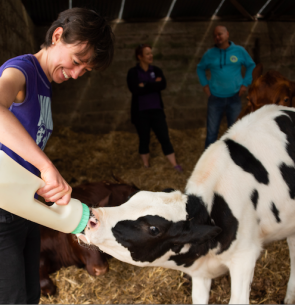 Isobel Hutchinson is Director of Animal Aid, which is one of the UK’s largest and longest established animal rights organisations. Animal Aid campaigns against all animal abuse and promotes cruelty-free, vegan living.

After graduating from Oxford University in 2012, Isobel undertook an internship at Four Paws animal welfare charity. There, she learnt more about the farming industry, and was inspired by vegan colleagues to embrace this compassionate way of life. She joined Animal Aid in 2013, as she was keen to work for an organisation that advocated for animal rights. The first area she worked on was the campaign to end animal experiments, especially those funded by medical charities.

She then worked on the organisation’s campaigns for farmed animals, before moving on to her current role. Isobel is absolutely dedicated to creating a cruelty-free world. She, and her colleagues at Animal Aid, are especially passionate about advocating for particularly vulnerable, persecuted and vilified animals, such as grey squirrels, mice and rats.