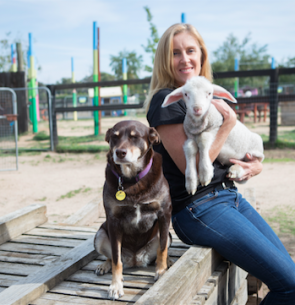 Our story began in 2001. When Jessica Bailey had been vegan for a year, she quickly realised how difficult it was to work out which products were vegan and which ones weren’t during her weekly shop. She also noticed that when people found out that she was vegan they would often say “I’d love to be a vegan but it’s just too hard”. What she needed to do became clear; she would make it easier to for people to become and stay vegan. So The Cruelty Free Shop was born, a one-stop-shop where people could get all those hard to find vegan foods and where someone had already done all the time consuming label reading for them.

Jessica, eager to make a real difference in the fight for animal rights and the push for a vegan world, decided that Sydney needed a vegan outreach event. She needed a way to reach the general public with the cruelty-free message. Jess pitched the idea of running a large annual vegan event to Animal Liberation NSW who enthusiastically embraced the idea, and The Cruelty Free Festival came into being. The Cruelty Free Festival is now an extremely successful annual event in Sydney that attracts over 5000 people. Attendees come in droves to learn about cruelty-free living. They eat vegan food, purchase cruelty-free products and learn to make a big difference for animals by making small changes in their everyday lives.

In 2012 The Cruelty Free Shop made the move from online store to a fully-fledged supermarket in Glebe, in inner Sydney. Our Glebe location also serves as a head office for our team, and nearby is our warehouse for our online store. Two years later, in February 2014, we opened a shop in Fitzroy, Melbourne with a huge launch party. This was a particularly exciting time for the Cruelty Free team as we’ve always loved visiting Melbourne both for its fantastic vegan restaurants and the strength of its vegan community. We have always been close to the heart of the Sydney vegan community, and the vegans of Melbourne were quick to embrace us as their own. 2016 saw the Cruelty Free Shop open two new stores, one in beautiful Brisbane and another in our nation’s capital, Canberra, which we ran for three years until they unfortunately closed mid-2019.

We’re proud to be at the heart of Sydney and Melbourne’s vibrant vegan scenes. A hallmark of that special connection is our bi-yearly Vegan Day Out festival. Which has been running out of our Sydney and Melbourne locations for several years now. This festival encourages and stimulates the growth of the vegan community through working with our neighbourhood to promote our vision of a cruelty free world. Restaurants and cafes offer vegan meal deals and specials that run all weekend long. This is not only a great day out for vegans, it also demonstrates to vendors the huge and ever growing demand for vegan food options, as well as allowing non-vegans to sample many kinds of delicious vegan food. Many of the specials created for the event have become permanent fixtures on menus across both Glebe and Fitzroy, and the festival has earned its place in the calendars of the vegans of New South Wales and Victoria.

Our shops are safe spaces where people of all walks of life can freely and openly embrace a cruelty free life, without fear of bullying, harassment, or negativity. We seek to create spaces where vegans and vegan-curious alike feel welcome to both explore veganism, and to participate in vegan outreach and public education about animal rights. Our all-vegan team will always make time to answer your questions and provide information to about veganism or animal rights.

We support animal rights organisations by fundraising for them both in store and online, through selling merchandise with the proceeds going to charity, through event sponsorship and by regularly donating vouchers and hampers to various animal rights and vegan groups to be used in fundraisers.