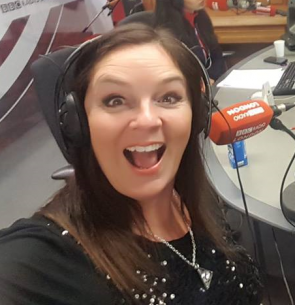 Karin is the founder of www.VeggieVision.TV – a vegan website with mini programmes, interviews, reviews of vegan products, recipes, competitions as well as its own dating site www.veggievisiondating.com.

Karin is thrilled to work closely with VegfestUK the biggest vegan festivals in Europe.

She is the VegfestUK ‘MC’. She gains VegfestUK and veganism a lot of media coverage and she encourages and arranges for media to attend the festivals too.

Karin introduces the speakers in the auditorium, she presents the awards and is the moderator for the debates which are filmed in front on a live audience as well as sometimes streamed live worldwide.

She has hosted the awards with Sarah Jane Crawford, and interviewed Evanna Lynch and Lucy Watson on stage.

Combining her love of radio Karin now has a popular radio show every Friday from 6pm to 8pm on Essex based Phoenix FM.

Karin has interviewed experts, local people as well as high profile celebrities including:

Karin also coaches media and celebrities to be vegan – and is the Ambassador for Wetnose Animal Aid.

She has written for Leona Lewis’s blog as well as for the Ocado blog and advised Centre Parcs about vegan options.

Karin also runs MAD-Promotions an ethical vegan PR company that focuses on businesses that are making the world a better place.

She also works with many vegan client and vegan products too – constantly getting the positive veggie friendly message into mainstream media.

Karin has gained clients £100,00’s and £100,00’s over the years in free editorial coverage – resulting in profiles of clients being raised, clients gaining their own regular columns, running competitions, having products reviewed and more.

Karin has taken part in more than 250 radio interviews – all promoting how easy, fun, healthy and kinder it is to lead a vegan life.

Karin has been asked to write for other publications in connection with veggie and vegan living and has recently written for various trade publications on how and why they must cater for vegans.