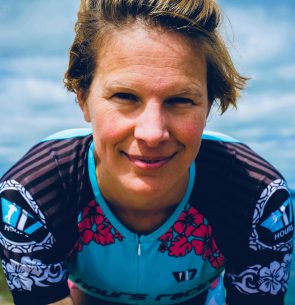 In short Kate Strong helps leaders lead. She does this through offering coaching and courses for people striving to remove the glass ceiling off their potential.

And, Kate isn’t a stranger to pushing herself physically, mentally and emotionally.
Believing that great Coaches lead by example, in 2022, she’s embarking on being the World’s First person to cycle 3,000 miles coast to coast of America, swim the English Channel and summit Everest.

Graduating with a Double Masters in Mechanical Engineering from England & France, she worked in aerospace engineering and then moved to Australia owning & operating hospitality companies.

In 2014, she became 2014 age-group World Champion in triathlon and returned to the UK, establishing herself as coach & consultant, specialising in Leadership & Sustainability.

She volunteers for a local homeless charity, is a TEDx speaker, plant-powered and an investor.