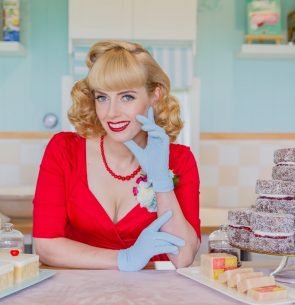 Retro baking sweetheart, Sara Kidd, is rocking the vegan baking scene with her retro flare and eye-popping baked creations. Sara is a food columnist for the world’s most popular vegan food mag: Vegan Food & Living UK, as well as Nourish Mag AU. Her cookbook, Bake Vegan Stuff: Easy Recipes for Kids…and Adults Too!), is wildly popular, and baking enthusiasts everywhere are tuning into her YouTube channel to watch her whip up something spectacular. She also runs one of the most interactive vegan baking groups on Facebook with over 14000 members! Sara launched a new vegan baking show on 12th July 2020 called VEGAN AROUND THE WORLD, where she is veganising iconic cakes from 12 different countries.