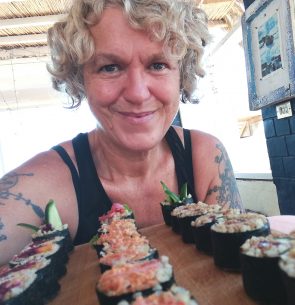 I make amazing raw cakes and much more in the first Bedouin owned vegan restaurant in the Sinai desert of Egypt. I free dive in the Red Sea and I campaign with Sea Shepherd, I also campaign about plastics and run clean ups in Dahab, Egypt.

I grew up in England a long way from the oceans, but I always loved the sea and I felt connected to animals from a very young age.

I stopped eating meat and fish when I was thirteen.

I co organised the Circus to Palestine and went to the Middle East seven times from 2007, I found Dahab on those trips. I juggled working in care homes in the UK, my ageing parents, my small boat, raising funds for the Circus and learning to prepare raw food in my tiny galley. I kept my balls in the air.

What I learnt from war zones is that the majority of people want peace, and that fuelling arguments about territories ignores the biggest threat to all humans and that is the deconstruction of our collective environment.

In 2014 when I had the delicious combination of time and money, after participating in a research scuba diving course in the Red Sea I took all my courage and applied to Sea Shepherd. I’d seen their stalls at several vegfest events in the UK.

My first campaign was Grindstop on the Faroe Islands, an unholy place in the middle of fierce seas, I stayed up there for three months, I became team leader on our island, I cooked a lot, we had lots of young activists on campaign, eating together helped us to bond and keep functioning in a very hostile environment. Having a strong sense of humour was an essential ingredient to keeping up moral with the land crew. We successfully prevented a lot of pilot whales from being killed.

The next year I became a free diving instructor and learnt to sail.

Diving up to 50m with no tanks is scary and thrilling, it gave me immense confidence that if I could do that I could do anything I put my mind to.

I applied again the Sea Shepherd in 2016 as a cook, I travelled to Baja in Mexico to join the crew of the MV Farley Mowat, I learnt to cook for 18 people three times a day in an extremely mobile galley. I stayed for four and half months. We were protecting the Vaquita refuge near San Felipe. Poachers taking Totoba bass for Chinese medicine are pushing this species towards extinction.

The crew ate a lot of food, it was tough, the avocados were amazing.

On return the the USA I prepared dinner for JP DeJoira and guests, the generous donor of one of our boats. My confidence as a cook was growing.

The next year I joined the crew of the RV Martin Sheen, we sailed over 8,000 nautical miles researching whales, their migration habits, the effects of micro plastics and other pollutants. We saw whales every day, blue whales, sperm whales, humpback whales. I saw pilot whales swimming freely, so majestic and intelligent, one of the arguments the whalers in the Faroe Islands use it that the whales don’t have feelings, when we got close to the pod, the large males were obviously protecting the pod and they spy hopped to look at us, any one with consciousness can feel these beings have super sensitivity, intelligence far superior to ours, they don’t destroy their own environment for a start and have super strong family connections in the pods.

The destruction of the aquatic environment affects all of us wherever we reside, our oceans produce over 70% of the oxygen we need to breath. More people are looking at plant based diets for personal health as well as for animal welfare reasons.

Given that domestic cows and pigs are now one of the major enemies of our oceans due to toxic waste products entering our rivers and polluting our seas. We need to seek alternatives.

As I gradually became vegan in 2012, cakes were the last thing I wanted to give up, I began experimenting in my tiny galley on my canal boat, on the RV Martin Sheen the crew were my human guinea pigs, I found recipes online and altered the ingredients to what we had on board. I got better, my long time friend and landlord Mohamed Soliman offered me an empty restaurant right by the Red Sea in Dahab, I thought about it for five minutes and decided to try it out, I started selling raw cakes, “Life’s short eat pudding first”

People supported our restaurant and it’s become a hub for beach cleaning, with local Bedouin children, recycling plastics and a place where challenging conversations start and actions begin.